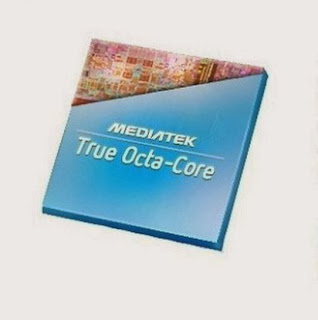 MediaTek has finally introduced the MT6592 chipset, which is being called as the world's first true octa-core mobile processor. The company is now planning to make this brand new chipset available in the devices which have been running on the most popular Android Jelly Bean mobile Operating System by the end of current running year i.e. 2013.

However, the Android KitKat powered smartphones featuring the new MT6592 chipset is very much likely to be launched in early months of 2014. It is going to be real fun to watch how these new chipsets perform in the smartphones running the most advanced version of Android OS.

MediaTek claimed that the MT6592 mobile processor is basically an advanced heterogeneous computing SOC, and it also includes scalable multi-core processing exclusively developed for advanced multi-tasking purpose. It is developed on the 28nm HPM (high-performance process), and it carries eight CPU cores. Each of the cores is fully capable of clock speeds up to 2GHz. MediaTek added that this processor can easily run both advanced demanding tasks and low-power consuming equally well. Just the full capabilities of all eight-cores need to be attached in any combination whatsoever.

It is worth mentioning here that the newest chipset features an ultra modern scheduling algorithm which beautifully monitors the power consumption and temperature in order to ensure optimal performance of the smartphone every single time.

Must Read: Samsung might explore low-cost MediaTek processors in its mobiles in 2014

The MT6592 chipset comes up with a super advanced video playback system, which supports Ultra HD 4K*2K H.264 video playback. It has also the needed support for almost all the new video codecs like H.265 and VP9. It also features supports for a 16-megapixel camera and the best of the lot for a full-HD display.

MediaTek has added some new things in the MT6592 such as Miracast screen-sharing, full connectivity capability for dual-band 801.11n Wi-Fi as well as GPS, Bluetooth and an FM tuner.

We should add here that Intex has already displayed its very own first true octa-core smartphone prototype at a recently-held event on last Wednesday. The company has officially confirmed it by announcing that the yet-to-be-named smartphone powered by the MT6592 chipset will be released in January 2014. In India it is likely to cost around Rs. 20,000 only.

Intex has also given some hints on the expected specifications of that smartphone. It will come up with a octa-core MediaTek MT6592 processer clocked at 1.7GHz, coupled with 700 MHz Mali 450-MP4 GPU. It will feature a 6-inch HD IPS LCD display, 2GB of RAM with 16GB and 32GB inbuilt storage variants, and it will be running on Android 4.2.2 Jelly Bean mobile OS.

MediaTek’s new MT6592 chipset is surely claimed to be the world's first true octa-core mobile processor, and we’re eagerly waiting for the launch of such smartphones which will be powered by this advanced processor.
Posted by Aditya Dey
Labels: MediaTek, Mobiles, Tech News

We hate spam as much as you!