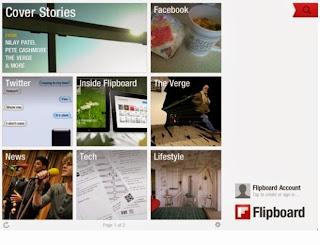 As we all know Christmas is just a month away, and undoubtedly one of the most the popular personal magazine creators Flipboard has launched curated shopping catalogues in order to take full benefits of this ongoing holiday shopping season.

The developers of the Flipboard have introduced a new tool on last Monday which will help the users to highlight their own favorite products in a nice-looking catalog-like format by displaying their gift wish lists via their profiles (check the official blog post from Here). This digital tool has been made in such a way that users can easily add links to it so that the products can be bought by the potential buyers while browsing via the dedicated selections on Flipboard's own application for iPhones and iPads or even Android smartphones.

At the time of writing this article, many leading merchants and ecommerce sites including the likes of eBay Inc. and Gap Inc.'s Banana Republic have already started showing their products through Flipboard catalogs.

Palo Alto based Flipboard was first launched as a startup and very soon it successfully began to allow users to first curate and then put together digital magazines on their favorite topics. According to a latest reports more than 4.5 million different magazines have already been curated by the Flipboard users till now. These magazines are focusing on different topics from people's hobbies to their favorite brands or club teams or news.

It has to be mentioned here that Flipboard team members generally include digital ads on many of the popular magazines, and it is one of main sources of revenue for this startup. Flipboard also shares a part of its revenue with more than 8,000 publishers who have joined the site to earn money online.

Mike McCue and Evan Doll set up Flipboard in 2010 with the aim of providing quality digital magazines carrying the highlighting and trending content extracted from various links that are actively shared on Twitter or Facebook. Recently McCue had announced that Flipboard already managed to attract more than 90 million users so far. It has eventually become one of the most popular and closely watched startups of the Silicon Valley.

However, Flipboard never disclose its financial results officially as it’s a privately held company. As per reports, the owners of this popular company have raised around $110 million from the likes of Goldman Sachs Group, venture capitalists and other key investors.

Its worth to be mentioned here that in 2007 McCue sold his last startup, a voice-recognition software maker TellMe Networks, for $800 million to the IT giant Microsoft Corporation. The other owner of Flipboard Doll used to work for Apple Inc. as a senior engineer, and he eventually helped to design the famous iPhones.
Posted by Aditya Dey
Labels: eCommerce, Flipboard, Startup, Tech News

We hate spam as much as you!